This doesn’t appear to be my fault. I’m housesitting out around Hatcher Pass and earlier this weekend, the chinook winds brought about a winter thaw, followed by colder temps that brought about ice.

It’s so icy that this morning the dog fell in the middle of the driveway, which is more like an ice rink, and couldn’t get up.

Rocky is 15 years-old and weighs about 120 pounds. His hips are weak and no matter how he struggled, he couldn’t muster the oomph to pull himself up. I threw on my running spikes and tried to help. I fell. I fell again. He struggled and I fell and it was like a bad comedy routine.

Finally I grabbed Rocky’s collar and pulled like hell. I fell down again but managed to get the poor dog over to the side of the driveway.

Here’s how he looked when he got back to the house. 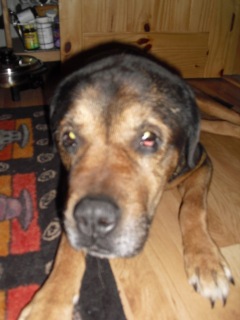 And here’s what he did the rest of the day:

There was no way I could possibly run outside. I couldn’t even get my car out of the driveway to drive to the nearest gym (about 12 miles away). So I did the most depressing thing possible. I ran inside, in place, in the living room.

I ran while watching “Toddlers and Tiaras” on cable. When that finished, I watched a bad movie called “The Shunning” about an Amish woman shunned by the community.

I ran for 90 friggin’ minutes and never moved from the living room carpet.

It was the most depressing run (was it even a run??) of my life. Yet I had to move. I had to exercise and work up a sweat because I was going crazy stuck inside the house for days, unable to go anywhere. (I think they call this cabin fever, and I suppose it’s better to run in place while watching trashy TV shows than drinking whiskey and shooting up the house.)

But the good news is that my book received a great review from Library Journal Review. Here’s the summary: “First-time novelist Ritchie writes engaging characters and creates a sense of place that brings Alaska to life. For the reader of women’s fiction who can handle a bit of the risqué.”

Happy running, everyone. Hope it’s not too slippery wherever you happen to be.

8 thoughts on “A new running low”