Or at least that’s how I feel now, sitting on the comfy couch and stuffing my face with pretzels. Twenty-four hours ago as I was struggling up the mountain, I felt quite a bit differently.

The Mount Marathon Race takes place down in Seward, my old stomping ground. It’s a steep and obstinate climb, with grades up to 60%, and yesterday it was raining so that the bottom half of the course was muddy and slick.

I did no mountain work to prepare for the race. It wasn’t on my A-list. Well, I don’t really have an A-list but I’m concentrating on the Her Term Half Marathon later this month and the Big Wildlife Marathon in August.

My goal? To complete the race without injury. Sounds simple? Umm, not so much.

It was raining and about 49 degrees when we reached Seward. I picked up my bib and race chip and stood on the sidelines watching the last of the Junior racers finish. I refused to take off my winter coat until the last minute. (Yes, a winter coat in July. Welcome to Alaska, people.)

I finally peeled off my coat five minutes before the gun went off. I was in the first-wave again, with the fast women, and man, some of those racers were fierce (!!). The first half mile of the race weaves uphill on paved roads to the foot of the mountain. My aim was to run fast and keep some of the top tier women in sight. According to my Garmin, I ran this at about a 7:31 pace (thank you, speedwork).

Then we hit the mountain and the root section, where you basically scramble straight up, with nothing to grasp but wet roots and slippery rock, and the top women slipped out of sight. Still, it was glorious to see the backs of their heads for a bit.

I got stuck on a rock and couldn’t reach the next handhold so I yelled to the woman behind me, “Please boost me up by the rear, okay?” And that woman, bless her heart, cupped my behind in her strong and capable hands and gave me a big shove to the next hold.

From then on it was an uphill slog through the mud. We slipped and fell, slipped and fell and trudged on. I loved this part. I love the mud, love getting dirty. And because we were sheltered by trees, the weather was warmish enough that I began to sweat.

Then we hit the halfway point and popped out of the trees. Below us, Resurrection Bay stretched out, and above us, the second half of the mountain waited.

The wind also waited, and it was strong enough to practically knock us off the trail at points. It was also cold, so cold that my teeth chattered. This was when I began to wonder what in the hell I was doing racing up a mountain when I could be home lying on the couch reading a good book.

Surprisingly, I made it to the top in just over 59 minutes, my fastest time ever (the women’s winner finished the whole race in about 53 minutes). I rounded the rock and headed back down. Sadly, there was no snow to slide in; we had to run the whole long and steep and brutal way.

I took it really easy on the downhill, since I didn’t want to fall or hurt myself; I have an 18-miler this weekend on my marathon schedule. Many, many women passed me (about 35) and I just sucked it up and yelled “Go for it,” after each one flew by.

Still, even with running the downhill conservatively I finished with a 40 second PR.

I was a muddy mess, so I changed my clothes in the bakery bathroom and MM and I took a five mile hike over the Lost Lake Trail. 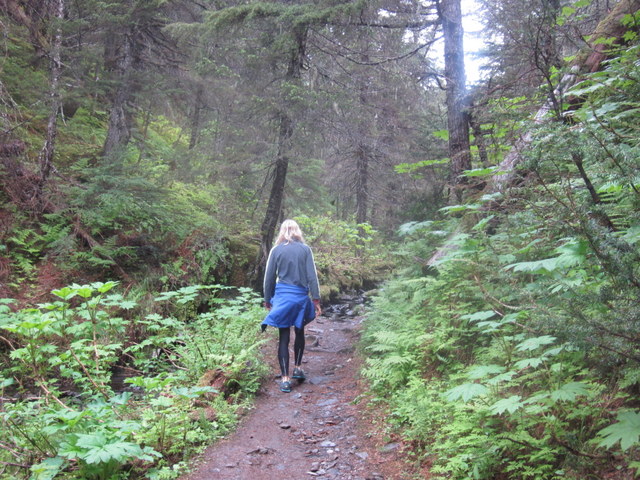 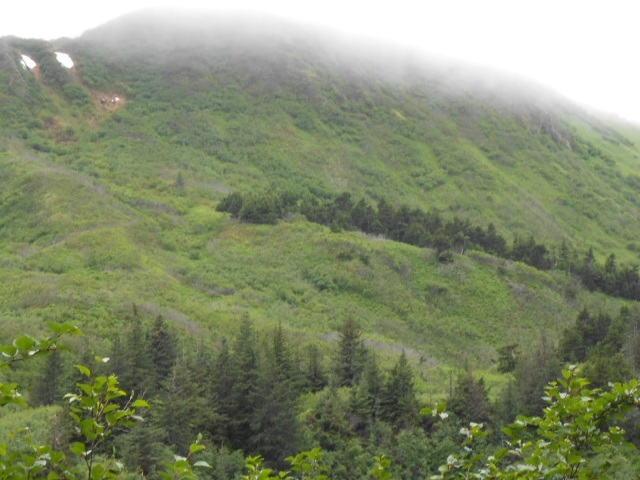 Hope everyone had a great Fourth of July.