We kicked off the spring with our running club’s first run of the season, and I didn’t totally suck. This was news to me since I’d done no speedwork (ummm, what is speedwork?) and very little pace work. I also hadn’t raced in two years. Add in that it was a 7.5km and I’ve never been known for my speed and, well my only expectation was to finish without puking.

I’m happy to say that I did just that. In fact, I felt strong the whole way. I realize that this probably means that I didn’t push myself enough but so what, eh? I had fun, and that’s what counts.

My time wasn’t the best but wasn’t the worst: 37:01. My 10K time used to be faster but I need to take into perspective that I haven’t raced for two years and only began running consistently again earlier this year. Mostly, I just blessed to be able to run, and race, again, injury-free (knock on desk).

MM did well, too, so it was a good evening all around. Anchorage Running Club puts on some great events, very low-key and friendly. I love the vibe. Plus there are usually cookies at the end, which is a huge motivator the last few miles.

The next day, MM and I hit the Turnagain Arm Trail in the evening for 6.5 miles of rutted trail, and hills. It was one of those magical runs when your legs feel fatigued but your minds says ‘Go, go, go,’ and everything blurs and comes together until you feel transcended by it all.

And then we came around a curve and saw the bears. The first bears of the season, a blackie mother and three cubs, all of them scurrying off the trail, no doubt due to the loud warning of my bear bell. We stood there, close together but far enough away to feel safe, and watched the cubs scamper up an old tree as the mother nudged them off into the brush.

I wish I could describe the feeling: heart-pounding, the taste of danger in our throats and yet that thrill, that exhilaration of coming so close to wildness. We waited for a few minutes after they disappeared and then continued running. At the top of the very next hill, we encountered a moose. 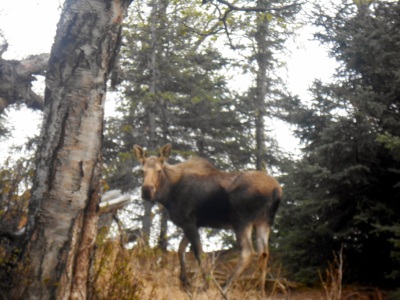 This was a youngish moose with an attitude, and it wouldn’t get off the trail. Because of heavy brush, we couldn’t go around it, either. We crouched in the bushes and waited. Whenever we crept too near, it splayed back its ears and kicked out its legs as if to say: Come any closer and I’ll cream you good.”

It finally wandered off into the brush and we kept on running and believe it or not, less than a half mile up the trail we came across yet another moose, this one a lot more mellow; we were able to run around it with ease, though I held MM’s hand and made him run on the side of the moose, so that if it charged he would be attacked first, hee, hee.

On the way back, we saw two more moose up on a hill and off the trail. It was wild. It was like running through an open zoo. I felt charged and free and alive. And everywhere around us were perks of green: grass shooting out of the ground and leaves budding on the tree. Such hopeful shouts of color!

The last half mile of the trail is downhill and groomed and fast. It’s also very peaceful, almost serene, with views of the inlet on one side and trees, trees, trees on the other.

I don’t really have any big expectations for this year’s running season. I want to run, and as much as possible. I want to run trails, as much as possible. I want to see how far I can go, push my limits, venture out into that no-man’s zone (no woman’s zone?) where you bonk and want to die but keep on going and then, magically, you feel strong again, and whole and complete and reborn. I so look forward to reclaiming that feeling.

Until then, have a great weekend, everyone. Run, hike, read, but mostly, do whatever it is that makes you feel the most alive.

Sad news: Our last cat is dying. We just got the lab reports today, her kidney function is almost zero and there is really no hope. Tears my gut. We lost my most favorite cat last year, my dog earlier this year and now Fluff-Busters is going, too (The Last Pet Standing, as we call her). She has lost so much weight yet she’s still feisty, still kept me up last night, wanting to go outside. Having pets, and loving them fully, is such a joy, and such a heartbreak. Here’s to you, Fluffers. You’ve been a great friend, and a warm, fluffy spot to lay my head during hard times. Happy journeys, little one. 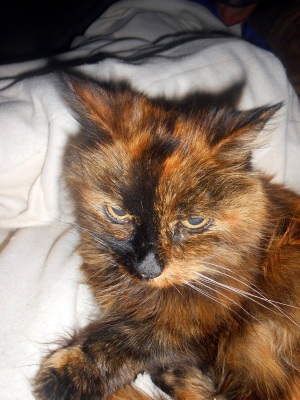 3 thoughts on “Bears, moose and first race of the season”