Yesteray was my running rest day so I took the dog for a walk on the trail that winds through the Mount Marathon Bowl. I had never taken it before, since I’m usually too busy climbing up the mountain to think about going around it.

The footing was icy but not too bad, and as we walked in deeper and the mountains closed around us, it felt almost magical.

It was almost dusk, that wonderful and heavy twilight hour before dark, and the ice gave my footfall a nice little snap that echoed with each step until it fell into a rhythm in my head: Step, snap, step, snap

The sun went down and the sky turn pink and lavender, and I knew I should turn around, since I didn’t have my headlamp with me, but I kept walking. It felt so peaceful back there, so empty and barren and quiet, nothing else around.

And then, uh-oh, my mood was ruined a bit when we came upon this blocking the trail: 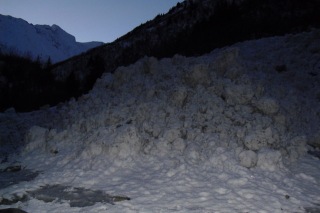 That might look like a harmless pile of snow bunched up by, say, a snowplow. Except we were in a mountain valley, miles from a road, and those boulder-sized hunks of snow were actually caused by an avalanche.

﻿﻿﻿﻿﻿﻿﻿﻿I could see the trail of the avalanche running down the mountain, flowing as straight and smooth as water. It was beautiful, in a primitive sort of way, and it also made me think of chances and risks and what might have happened had I been walking down the trail when the avalanche hit.

On the walk back the sky began to darken and I became lost in my head in that wonderful way that usually happens only when I run.

After I ate dinner and took a bath, I sat at my desk and wrote like crazy, wrote like I hadn’t written in a long time, wrote a scene so amazing and true that I wept, and even then, in the back of my mind, I was thinking: How soon before I can be back in the mountains?