Today an amazing thing happened: The sun actually peaked through the clouds.

Yeah, we had about 10 minutes of sporadic sunshine. The first in over a week.

It’s been raining so much, and so hard, that they’ve declared an emergency out in Mat-Su, where David and Jonnie, my doggie sitters live (hope their house didn’t get swept away because then, who would watch The Beebs?).

Today it finally stopped raining and I hit the trails for 11 glorious miles. Oh-oh-oh! There were some puddles, and some puddles-so-large-they-were-almost-lakes, but I didn’t care. Because I was running! And it wasn’t raining! And the trails were wet but not soggy!

I’ve been in a slump. I have all this book publicity stuff I’m supposed to be doing and instead I’m sitting around my apartment obsessing over stupid things: If I should move in with MM when I come back from my residency. If that groaning noise in my car I’ve been trying to muffle with the radio is serious. If the burning on my ankle is caused by my new running shoes rubbing (most likely) or something worse, like cancer of the ankle bone.

Anyway, here is a pic of my apartment. Isn’t it cozy? It’s kind of a writer’s dream. Small, with a deck and fireplace: Ahhhhh! (MM has neither a deck nor a fireplace, sigh, sigh, but I suppose sooner or later it comes to this, eh?) 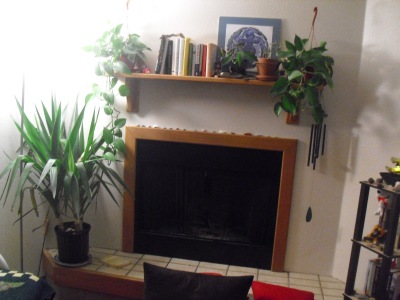 Anyway, if anyone has any advice/tips on how to give up one’s independence and move in with a man, I’d love to hear it. It’s a terrifying prospect. While I’ve had some pretty serious relationships, I haven’t actually lived with a man since my son’s father. And that was a huge mess I’d rather repeat. Thanks!

Reading:
I stayed up all night earlier this week finishing “The Help.” What a great book. The ending was a bit unrealistic but still, it was a good read.
Presently reading: “Parched” by Heather King