The most exciting and incredible thing: I won a race Wednesday evening.

Yes, these old legs carried me to victory. I even received a shiny blue ribbon.

The bad news is that only two women ran the 7.5K course (4.87 miles, according to my Garmin); everyone else opted for the 4-miler.

Still, I beat some men, which is a cool and worthwhile pursuit.

I didn’t take many photos. How do people take photos during races? Do they carry their phones/cameras and snap shots while running? Sounds like too much work to me.

Anyway, the Anchorage Running Club’s Do Run Run Race was the first club race of the season. What I love about the ARC races is that they’re low-key and comfortable, and people of all running levels participate, and there’s no strutting or preening, just a bunch of folks racing because they love to run.

We followed the Ship Creek bike trail, an out-and-back course that was fairly level and with enough curves that it never became boring (I don’t much care for flat courses).

MM raced too, and of course he beat me. He did manage to take a blurry pic of me holding my ribbon. Look closely, folks: This will be the last time you’ll ever, ever see me this close to a blue ribbon.

To celebrate my victory, we took The Beebs for another beach walk. Most of the ice bergs had melted and we caught the sunset over Sleeping Lady Mountain (which isn’t really a mountain, more of a ridge, at least by Alaska standards).

See how indescribably beautiful the evenings are up in Anchorage? This is why I stay in Alaska. This is why I suffer through the long and cold and dark winters. Because where else is there such twilight, such silver/blue/lavender shadows stretching across the horizon? 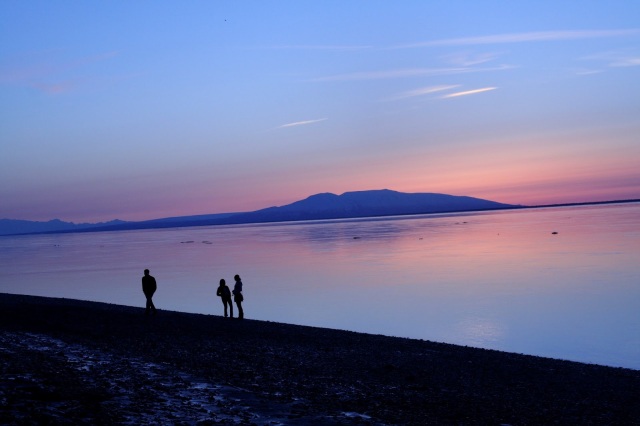 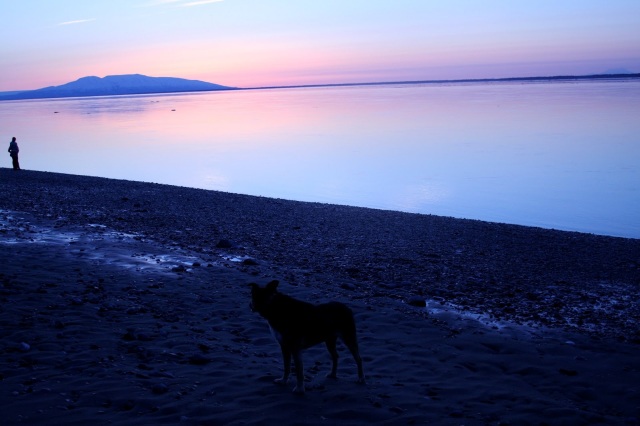 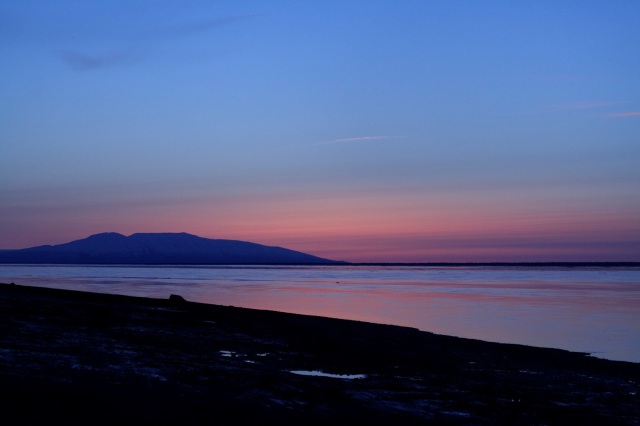 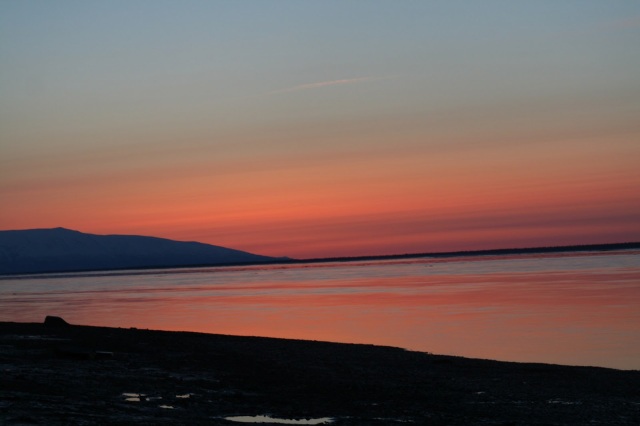 Tomorrow we’re running a 16-mile trail run. I can’t wait, especially since today it hit 65 degrees in some areas of town. I sat out in the yard in shorts and a tee-shirt, even though there were still patches of snow around me. Such juxtapositions–I suppose that’s what keeps Alaska interesting.

Can you see the woodpecker in this photo? (Remember those “Highlights for Children” puzzles where you had to find the objects hidden within the picture? I used to love to read those at the doctor and dentist office.)

Anyway, this little guy or gal visited while I was sitting out in the yard writing. It only stayed a few minutes but no matter, it was nice of it to fly in and say hello.

Happy weekend and running, everyone.

6 thoughts on “I won, I won, and another beautiful Alaska sunset”