Yesterday I pulled myself away from my writerly isolation (is there such a word as writerly? I dunno. Maybe I just made it up) and drove out to Alyeska Resort in Girdwood to visit MM, who was staying at the lodge for three days for a work conference.

I’ve been at the resort but I’ve never been inside one of the actual rooms, which are pricey. But since the State of Alaska was footing the bill (thank you, MM, for working for a company that frequently sends you us to conferences in cool places like Hawaii and Portland and now Girdwood)

So of course we hiked and ran up Alyeska Mountain. It was late afternoon, the end of a sunny autumn day, the air crisp with a lingering warmth. Except for one other hiker (who was faster than we were, even though we were booking it), we had the mountain to ourselves. The tram was closed for the interim before the ski season and it was so quiet, and the leaves were turning, and the mountains were topped with snow, and all around was a paradise. 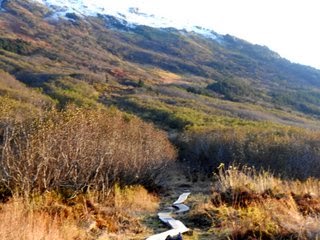 The biggest thrill was running in snow toward the top. Okay, by mid-winter I am sick of running in snow but since the temps were still warm and it was the first snow, it was kinda special. 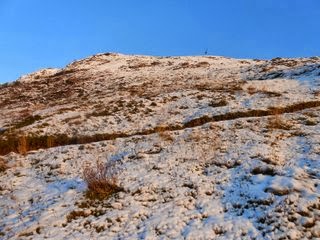 We went back to the room and did something I’ve never done before. And it was so exciting!

After we ate, we swam, and the pool at the resort is amazing. It was delicious and warm and the bottom was painted deep blue so that with the lights on it waved the most deep and haunting shadows.

And then it was 11 p.m. and as MM curled up in the very cozy room, I had to get in my cold car (there was frost on the windshield!) and drive back to Anchorage because dogs aren’t allowed in the hotel and we couldn’t find a sitter and poor Beebs is old and set in her ways and poops on the floor whenever we leave her alone.

It’s heartbreaking watching your dog age. Just. Heart. Breaking. I had no idea. I want to take her old and smelly head between my hands, lean down close and whisper: Stop aging. Please? But of course there’s nothing I can do and Beebs is happy sleeping through the day and taking short walks and eating everything in sight. She’s getting a bit chubby but so what? Food makes her happy and I’ll be damned if I’ll put her on a diet, not when she’s 13.5 years old. I’m planning on eating like a pig the last couple years of my life. I’ll still run, though, so I probably won’t get too fat.

Oh, oh: I interviewed Ron Nicholl for a magazine story. He’s 70 years old and runs the Susitna 100 Race each year. It’s 100 miles through off-road winter trails around a series of lakes and swamps.  (Karen and Matt did the 50K a few years ago). This year he’ll be almost 71 at race date. So inspiring. He said that he runs around 40-60 miles a week. Unbelievable. And when I called to interview him, he was in Idaho getting ready to run a 50K the next morning. That is so going to be me at 71. Or at least, I hope. Now I just need to run a 50K and 100 miler now, eh?

8 thoughts on “Alyeska Mountain in the snow”