When the Mesquite Canyon 30K race began last month (okay, okay I’m a bit late with this recap), I was crouched in desert brush, my shorts around my ankles as I got ready to take care of business because, you see, there were only like four port-a-potties and the line was ridiculously long.

Then I heard a sharp sound, looked up and saw the brightly-colored backs of runners flying down the trail. I shouted to my partner, who was even farther away in the brush trying to take care of business of his own, and we adjusted our shorts and hightailed it to the starting line. We were in dead last place. It was hilarious.

It was also 6:45 a.m. at White Tank Mountain Regional Park in Waddle, AZ, outside of Phoenix, and my partner and I had dragged ourselves out of bed at the ungodly hour of 3 a.m. in order to make the drive up from Tucson. Because the temperature was slatted to hit the 90s, starting times had been moved back to accommodate the heat. We were both a bit apprehensive about this, seeing that we are from Alaska and our summer temps rarely top 65 degrees. And yeah, while we had been in Tucson for two months, we hadn’t encountered many days over the 70-degree range.

But we were prepared. We had our hydration packs and arm sleeves (the better to stuff with ice cubes, my dear) and cheapo bandannas (two for $1 at the Dollar Store) to fill with ice and tie around our sweaty little necks.

We took off right after sunrise and it was so damned beautiful, the light and the desert all stretched out in front of us, everything quiet but the sounds of our footsteps against the sand. We spent the first few miles passing people, since we started so far back, and it was so much fun because the trail offered little rolling hills. And so the time passed until we reached the first aid station and soon after that we began to climb up and up and up a 1,500 foot ridge.

What I love about ultra and trail racing is the friendliness between the racers and how everyone works together, and how it doesn’t matter where you place as much as whether or not you give it your all. I had some good chats with a couple of people: A guy from British Columbia; a woman from El Paso, and another woman who had moved to Phoenix a few years ago for work, and I kind of loved each one, loved them for their company and their conversation, loved them for the fact that they also agreed to spend a sunny and hot morning do something that so many people don’t understand: the total joy of running up and down ridges on a rocky desert trail.

And this race was great. I can’t say enough good things about it. The route was curvy with rolling hills plus one lung-bursting-is-this-damned-thing-ever-going-to-end climb in the middle, and the views were amazing, the desert in bloom, wildflowers perking up all around. 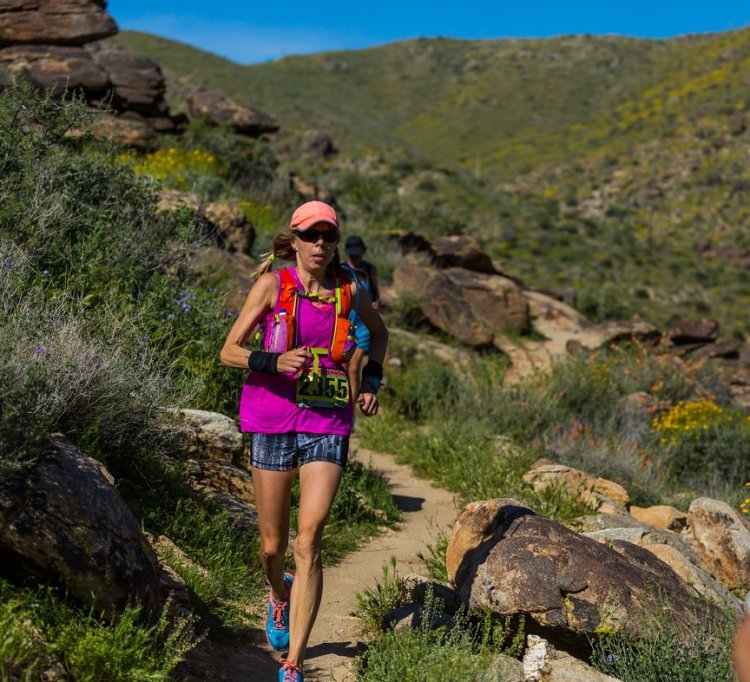 My goal in races isn’t to PR or win my age-group or beat this or that person, it’s to run happy and smooth, and to appreciate the fact that I’m healthy and fit and lucky enough to live in circumstances that allow me to follow my dreams. And I did run happily for the most part, and there was even a dog at the first aid station named Happy, which I took as a positive omen.

The looonnng climb that started around mile six wasn’t as bad as I expected, and while it was taxing and while I did sweat like crazy, it was over pretty quickly. Plus the 50K runners were running down the same time I was running up and it was fun to high-five them and offer encouragement.

After I crested the top of the ridge, it was downhill for almost 10 miles (whee!), and I can’t begin to explain how much fun it was to run down that curved trail, with the views and the blooming flowers. I almost cried a few times, I was so damned happy.

There were three aid stations on the 30K course, at approximately miles 4.7, 13.4 and 15.2, and the aid station volunteers were totally awesome, friendly and supportive. There was a great spread of ultra foods available, and when I charged into the last aid station and gasped, “Ice. Sports bra,” a woman poured ice cubes down my sports bra before I could even blink. They were that fast, that efficient. I kind of loved each and every one of them.

The last couple of miles were brutal. The heat pressed down and I was hot and tired and the long and glorious downhill segment was over and there were even, gasp, a few small and rolling hills, which I resented. But I just kept on running and finally met up with a woman named Micky and we suffered some of those last few miles together. And then I glimpsed the top of the finish line tent and there was just one small hill and wham, I was there. 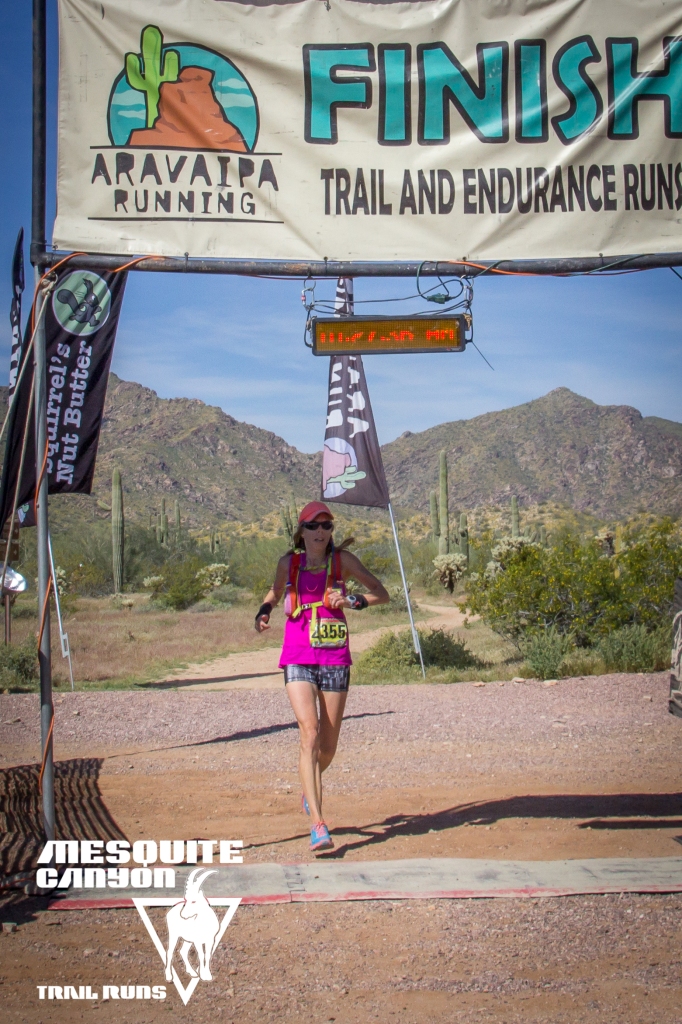 I finished in 15th place out of 40 women, and whenever I finish in the top half, I’m more than happy (especially since I was the second oldest woman running, hee, hee).

But best of all? There were vegan cheese quesadillas at the finish line. Vegan, people. My almost-vegan-because-I-can’t-stop-sneaking-goat-cheese little belly was so damned happy. My partner and I sat in the sun and ate quesadillas and bean burritos and drank cold water and we felt drowsy and happy and terribly pleased with ourselves.

This was the first Aravaipa Running race we’ve run and we are totally hooked. The race was seamless, the course diverse and challenging enough so that it never became boring, and everyone was friendly, helpful and supportive. What I really loved was the price: It cost us each about $50 to race a 30K trail race with fully-stocked aid stations and a super stocked finish line spread. That’s almost unheard of for most races, where a person can easily spend $35 for a lousy 10k with no aid stations and maybe a handful of pretzels at the finish. Best yet, Aravaipa Running offers a no-shirt option where, for $10 less, you can forego the shirt, which I never wear anyway.

And now, even though we’re no longer in the desert and I have a full summer of Alaska trail running ahead of me, I kind of, sort of have my eye on the Javelina Jundred at the end of October, the 100K, not the 100-miler. It doesn’t fit my schedule but still, one can dream, right?